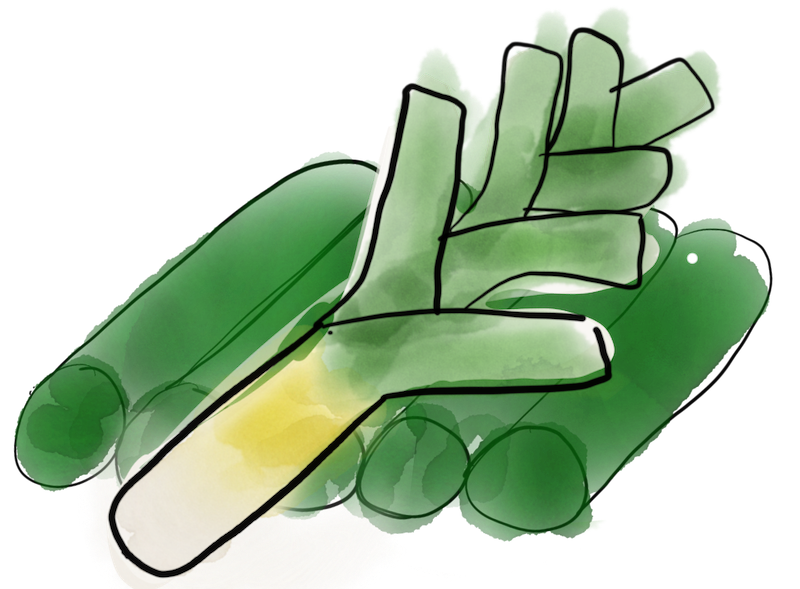 Leeky Raft (github.com/slin63/raft-consensus) is a Golang implementation of Raft as described in the paper: In Search of an Understandable Consensus Algorithm. It depends on Chord-ish, a membership layer I also built in Golang. Chord-ish provides Leeky Raft with membership information, telling it the IP addresses and identifiers of other nodes in the network. Chord-ish depends on a single introducer node, which other nodes use to join the network. You can read about how Chord-ish works here.

This allows Leeky Raft to not only discover and communicate with other members in its network, but also allows nodes to leave or join the network, allowing us to easily scale the number of nodes in a cluster without having to do any extra work.

Leeky Raft follows Raft faithfully and most mechanics in it are already well described in the paper for canonical Raft, so we’ll explore its implementation through the life of an entry.

First, you will see the birth of the network. Small things, formless and without a leader, congregating together to become one, composed of processes both Chord-ish and Raft-ish. Then, you will see the entry’s journey from when it is first created by a user, then submitted to the leader by a client, and finally to its application to a distributed state machine. Let’s begin!

The Life of an Entry in Leeky Raft

And Then There Was a Network

Leeky Raft is deployed on your local network (and meant to stay there) with the help of Docker and Docker-Compose. Docker is useful here because it allows us to simulate a number of seemingly independent machines, each with their own IP address and environment variables. First, a Dockerfile

Using the paradigm of a single introducer and many normal workers, we can now decide how many nodes are in our network simply by changing the value of <N> in the following command: docker-compose up --scale worker=<N>.

Behold! The membership layer gathers itself, connecting to the introducer and gossiping their membership lists. Now we have a network of 1 + 4 = 5 nodes.

We still have a problem. Chord-ish and Leeky Raft, although running on the same container, are still independent processes. They will not know of each other’s state unless they communicate, and so they must.

Before we go any further, let’s pick a main character for our story. Let’s tell it from the perspective of raft-consensus_worker_3.

The first thing our Leeky Raft process on raft-consensus_worker_3 does after it’s started is to fire off an RPC to the membership layer. This RPC, Self, returns a struct that contains a MemberMapT, as defined below.

MemberMapT is a mapping of server PIDs to their IP addresses. This tells Leeky Raft what other nodes exist in the network and how to communicate with them.

After it gets this information, Leeky Raft:

After our Leeky Raft process finishes napping, its election timer starts to count down and it waits for an incoming RequestVote RPC. If it doesn’t receive one, it dispatches RequestVotes to all known nodes. This is where reality starts to fork.

Sometimes, two timers are close enough that they both begin an election and neither one gets the majority. In this case, a new election begins.

Sometimes, our process’s timer is the shortest, it hits zero, begins an election first, and fires off RequestVotes. It gets the majority and becomes the leader. This is the reality that we’ll be using.

Our new leader celebrates its victory by beginning the timeless tradition of heartbeating. The leader heartbeats every 375 milliseconds, dispatching empty AppendEntry RPCs to all members of the network. The first round of heartbeats after our Leeky Raft process has won an election is especially important, because it tells everyone that they’re the new leader and that current candidates should give up.

Heartbeats are done as concurrent goroutines so that if a single server is slow to respond, all other servers will still receive a heartbeat in a timely manner.

This is important because Leeky Raft election timers are constantly ticking. If one ever reaches 0, that Leeky Raft process would start a new election. We only ever want that to happen when the current leader has experienced some kind of failure. This is assured by having each node reset its election timer whenever it receives an AppendEntries RPC.

If heartbeats were done sequentially, our heartbeating code might be blocked by a single slow node, causing a cascade of wasteful elections. Concurrent heartbeats do not have that problem.

Wonderful. Now all in the land know of the True Leader, raft-consensus_worker_3, Hallowed be Thy Container name.

Our Raft network is now ready to begin processing entries.

An Entry is Born

Somewhere stands a figure cloaked in silk robes weaved through with the bones of animals small and delicate. His skin is tattered, frost bitten, splotched from the sun but still pale. He is positioned in front of a machine of familiar design.

He whispers to the machine a timeless chant, one once passed down perfectly from generation to generation until the melting of ice bridges in a stirring ocean isolated one people from another, after which the chant began to evolve into forms impure and terrible. Echoes working through a winding ridge growing ever wider. Few know the chant as it once was.

Our Figure is of the few. He remembers the words as they were first spoken, ambling first from the tongue of his grandfather and, in dreams, from the moaning of caves in the wind and oceans in the endless surf. Incantations of a timeless perfection, made true by faith and faith alone.

His syntax is perfect.

Our entry is sent through an RPC called PutEntry to our Leeky Raft leader. Chilled with frost and running thick through the hair and feather of foxes and birds, the wind carries our remote procedure call, warmly bundled in a TCP packet, safely to its destination.

The client code waits for a response.

raft-consensus_worker_3, entranced in the raw ecstasy of heartbeating, blood rushing through its veins, ancient and bruised, almost misses the RPC to PutEntry. But few things can elude its attention. It acknowledges the RPC and begins executing PutEntry.

raft-consensus_worker_3 begins by asking itself:

"Yes", it answers to itself.

"I am. Were I not, I would have consulted my membership map and forwarded this client response to the true leader. Perhaps, in a past life, that would have been someone else. But today, I am the True Leader."

I don’t know how the logging got so colorful. It’s really more distracting than helpful.

raft-consensus_worker_3, having confirmed that it is currently the leader, sends the entry to the entries channel, a place where entries can sit idle until they are ready to be processed by the digestEntries goroutine.

entry is not traveling alone, however. It is bundled in an entryC struct, paired with a *Result channel that will notify PutEntry of digestEntries's success or failure.

Into the Frying Pan

raft-consensus_worker_3's digestEntries function does two things once it receives the entry:

After dispatching AppendEntries RPCs, digestEntries waits for responses. Once a majority of nodes have responded successfully, having faithfully following the One True Leader’s instructions, digestEntries notifies the upstream PutEntry function by sending a successful *Result object through the bundled entryCh channel.

digestEntries will continue processing responses, even after reaching a majority. But we need not worry about those, our time here is done. Let’s go back to PutEntry and see what is next.

Out of the Frying Pan

PutEntry has been patiently waiting to hear back from digestEntries this whole time. That is, it would have waited until digestEntries exceeded the preconfigured timeout, in which case PutEntry would have moved on and called it a day.

Now that the entry exists in its own log and is successfully replicated, presumably existing at the same index in all other nodes, we can refer to this entry by its index rather than its contents.

PutEntry sends the index of the successfully replicated entry to the commits channel. This is the beginning of its transformation from a senseless string to real, manifested state.

As before, the index of our entry is bundled in a commitC object accompanied by a *Result channel that will notify PutEntry of digestCommits's success or failure.

The commits channel is consumed by the digestCommits goroutine, who tirelessly awaits log indices to apply to raft-consensus_worker_3's state machine: a process separate from Leeky Raft with no name and an unspeakable API that we will not explore and assume just works.

digestCommits doesn’t do much. It simply reads the index of a commitC object from the commits channel and calls applyCommits(committed.Idx), its assistant who will do the bulk of the dirty work.

An Aside: a Hypothetical Situation

Maybe that someone is you.

It doesn’t matter now. raft-consensus_worker_3 is dead. So what will happen to our entry?

So many memories, so much time, so many successful TCP connections. Why was today different?

You continue to hit the machine hosting raft-consensus_worker_3 with a hammer.

This all, of course, was hypothetical. We’re still in the reality where raft-consensus_worker_3 is alive and PutEntry is proceeding normally. Our entry just got passed to applyCommits.

Let’s pick up there.

applyCommits receives the index of our entry and proceeds as follows:

It’s not entirely clear exactly what the state machine does with Leeky Raft’s entries. Some say that they are released into the physical world as spirit beings, searching until they find a suitable body in the form of a small bird or curious deer. Sometimes this happens quickly, and sometimes those souls are doomed from birth to wander until the end of time, resulting in a non-nil err from the RPC.

Some say that the entries are string serialized instructions for a pizza delivery service.

No one is exactly sure.

Regardless of what they do, there is a certain beauty here. Since Leeky Raft does not actually do any of the work for applying state, it can be easily generalized to maintain state for any application that can have its state expressed as a series of log entries.

Oh! Looks like applyCommits has finish applying our entry. digestCommits sends a successful Result to the commCh given to us by PutEntry. Let’s go back to PutEntry and see what’s next.

And All is Well

*result = *<-commCh is executed, since digestCommits sent a Result to commCh. This means that the RPC’s reply value, result will now contain actual information about the entry that raft-consensus_worker_3 was given so so long ago.

PutEntry's work here is done and lets the client know that nothing went wrong by returning nil as its error value.

The client sends a formatted response to our Figure’s STDOUT.